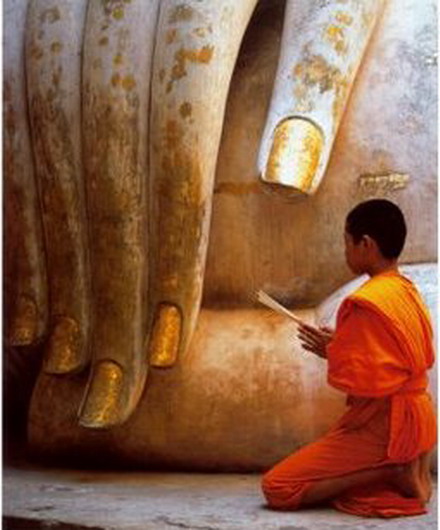 Dharma, by definition, encompasses all the lessons taught by the Buddha Sakyamauni. Dharma began to turn the park of deers near Benares, when the Buddha gave his first teaching based on the Four Noble Truths based on Suffering to the five companions. At this time, the concept of the “Three Jewels” has appeared on 3 bases:

Until now, the 3 bases are retained for the transmission of this current. If one of the bases is lacking Buddhism will disappear from this world. The Dharma is based on the Four Noble Truths: it is said that whoever understood the nature and experienced the “deep” nature of this base he/she will find and will cultivate in him/her a state of enlightenment, the State of the Buddha. This event of the 1st sermon can be understood by the image of a patient and a doctor:

“A patient suffering from a disease which upsets the harmony of body and by taking consciousness, discovers the truth of the existence of the disease (suffering). Seeking to free himself, or rather to eliminate this disease (displeasure) but can not heal itself, he decided to visit a doctor to find the cause of the disease (Origin of Suffering). After analyzing the symptoms, the doctor determines the type of disease (Origin Suffering), will require an order listing the paperwork and take drugs, which represent the healing way (way that leads to the end of suffering). The patient, following strictly and properly treat, will put an end to his illness (End of Suffering). After the extinction of the disease, the patient finds harmony between the elements of its body and thus balance with his spiritual body. “

By this simple “image” may simply identify the various elements that make up the core of Buddhism and its practice:

Reborn in a body of a human being is subject to the human suffering linked to the conditions of physical and mental body. The Buddha has categorized 84 000 types of suffering linked to the mental, and thus 84 000 remedies or means of recovery are given. By compassion to the beings the Buddha gave teachings based on / derived from the four Noble Truths to eliminate “illusory” layers of suffering that trouble the waking state of being. Depending on the situation, as individuals and as lived experience, the Buddha has, during its 40 years of instruction, adapted and diversified “topics” of lessons in order to make an immediate statement Awakening of the situation, to the persons and to the experiences.

For example, he gave teachings on:

The lessons and related topics are numerous and extensive, because the Buddha said: “Every action related to the mind, linked to the floor and connected to the body is a practice of my teaching.” This would mean that the Dharma is constantly put into practice in the life of a person, consciously or unconsciously.