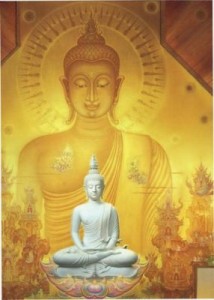 Increasingly, many people interested in meditation and especially its practice. This concept for a very long time and has been practiced and taught by the Buddha.

A first approach of meditation might qualify “Meditation” as “awareness”.

In any practice of Buddhism several points must be met:

The first of consciences, and that which is closest to itself, ie that which is related to our mind, which can be identified by the consciousness of its activity. Awareness of business simply means to see his work without attachment, see its state changes, it changes direction and also initiate an awareness on the efforts needed to “channel” on business, and never let the spirit s ’shake.

To give a picture of meditation, we can take this example:

A person is listening to a lecture, but listening to this course (the sensation of hearing), mind (concentration and attention) will begin to dream: the mind instead remain in the opening to the course well it turns to thoughts of opening out “of reality due to the concepts”, ie those of dreams and illusions so. The ear hears the sounds of course but the mind does not attach to the course, he is spirited away to the consciousness of time. The state of consciousness totally uncool blocks on the awareness of creating a barrier between the state of the ear, which receives its course, and state of mind, which does not follow the ’listening state. If at this moment the person “wakes up”, or rather his consciousness awakens to the existence of this spiritual barrier, it will bring back the rule of “leakage” of his mind to the state during his ear perceives it is as if the mind will print the sounds of the course in the memory, after states of attention and concentration. The course will then take the full path of the consciousness of that person. In this sense, meditation is simply to return home to our state at the moment in “full” consciousness, ie consciousness open to 100% in one direction. His practice is simple but also both difficult simply because it is accessible by all, difficult as it may be seen as something that is not accustomed to especially be the face itself, these states, his life at present. Here are a few representative images of the process and outcome of meditation:

1.Take a bottle of water, pour sand inside, shake and see what happens in the bottle: the water is troubled, and we do not see clearly. Leave the bottle now stand, the sand settles and sinks to the bottom of the bottle and the water becomes clear.

Water is the spirit The sand is the incessant agitation states

The practice of meditation is the simple way to make the state of mind clear and opened.

2.If a 2nd instance, if you drive your car on the highway at 120/130 km / h, and if you are asked to describe in detail the next house you’ll meet. In this situation it is difficult to do because agitation (rapid movement speed) removes the details of the set. To simply find these details, it would slow or stop the car.

In everyday life, spirit (represented by itself) runs continuously, either behind the times behind the company behind our work and behind the states (happiness, power …). Awareness of this agitation is to see these races disturbing vision of our state and make life surface, resulting in blindness constant depth of our states. Meditation is a brake that can stop this agitation, a brake that stops time and positions us at the present moment, that moment where we see things clearly, and where we see that life is realized, is like asking meditation on each inhalation and exhalation, and is above the consciousness of life is a concept of “truth”.

The meditation we learn to let go of attachments, to understand our statements, to master our emotions and give peace to oneself, in an open and attentive to the environment. Meditation is a practice very beneficial for himself and meritorious for the environment. She used to cultivate qualities such as generosity, compassion, love for oneself and for others also. It is often represented as the boat that takes us to the shore of wisdom and enlightenment.