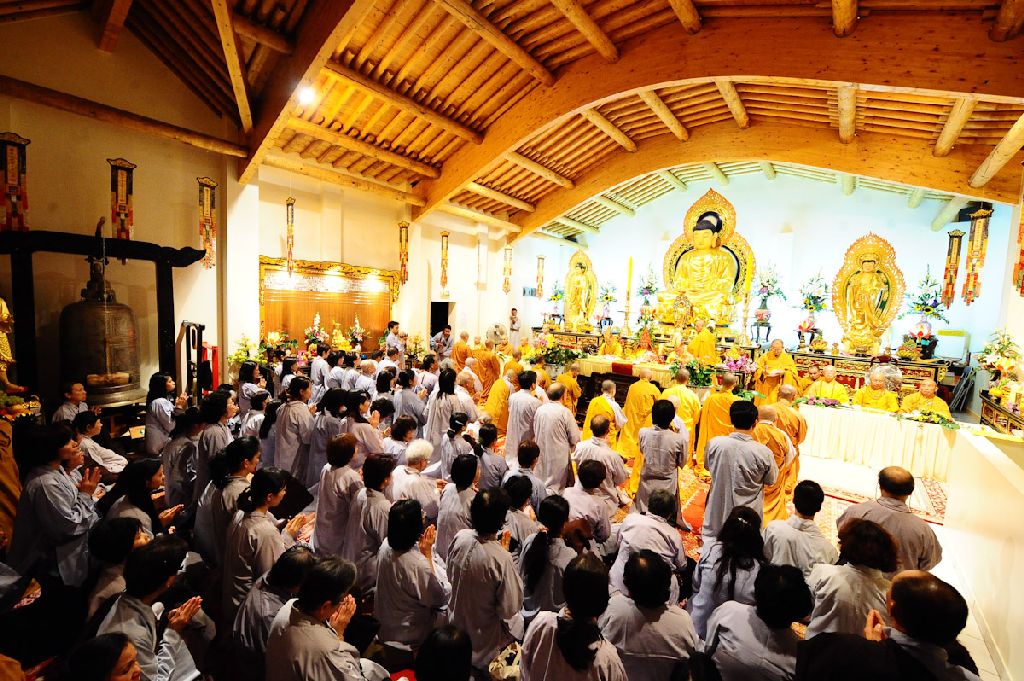 Among the topics taught in Buddhism, the concept of Karma or Kama “(Nghiệp in VN) is often cited to see explained. Buddhism also speaks of the “Law of Karma” (Luật nhân quả in VN), or sometimes “law of causality” or “law of cause and effect” or “Law of the seed and fruit” or “Law of Action and Reaction. “Karma” literally means “action”. The Act itself is the same law of causation expressed by the great scientists of our time. It is not a concept, see a creation of the mind, nor a “concept” from nature. Scientists say that any thing for the environment is governed by this law, we like it or not accept it. The Buddha, in his omniscience, has just reminded that this law is applicable in all things, both environmental states that “spiritual”. In this way, the concept of “chance” has no meaning in the results or consequences of events of this world and also other “worlds”.

In a sense, these three actions involve three reactions. And by simply applying the law of karma, one could deduce that by simple logic:

If this law is taken into account consistently, we should not have surprised on the status of the result, of course, the awareness of action must be applied to understand the reaction it generates. But often in today’s society, actions due to the 3 doors of the mind, speech and body act consistently with trends, see patterns: trends due to the karma of previous lives and habits due to repetition of actions this life, without the application of the meditative state and aware of them.

The Law of Karma can be represented in the round of existences (Term Skr. Samsara) by a large table, the dimensions of this table will depend on the number of lives “designed” by the “person”, and each cycle of “life” is represented by a puzzle piece, which in the process of rebirth and death, there is a logical and karmic to complete the table. When this table is fully populated, it will represent the landscape of samsara of “person” and this time it has reached a state of enlightenment and become Buddha. It is true that the complexity of designs beings, due to ignorance (Si mê in VN) is continually growing dimensions. And most of the other designs emotional help to prolong the cycle, a kind of “stack” of layers based on emotional qualities fundamental component of being. Hence often in the teachings, the words “blind” or “sails” are used.

A second pictorial representation is to take the picture of the use of a vehicle: the vehicle’s body symbolizes a person’s physical and spiritual body, that person. When a vehicle is ream some time, it is subject to the time factor, the factor mechanical wear until it falls down and can no longer be used as the human body which is subject to the conditions of the disease, of age and after death, the natural cycle of earthly life. Returning to the vehicle to continue to be transported, the person must find another vehicle, another way. The new vehicle will then represent the new person’s body at its next rebirth. The vehicle is new but it’s still the same person who leads, it’s like a rebirth in a new physical body but with the same spiritual body. Sure the karmic law in this case comes in a very simplified concept, but the karmic process is well founded.

There are multitudes of examples from the experience of this life to demonstrate the existence of this universal law. It might take some concrete examples to understand this law. For example, the consequences resulting conscious states of emotional concepts, such as from a state of non-patient imbalance may involve creating an emotional state of anger, which in turn propels into words or thoughtless actions. Each action related to a state of spiritual design creates a “landslide” of actions and reactions are controlled and not causing suffering or not.

For this reason action at present must be considered, taking into consciousness with wisdom to avoid creating an imbalance in the state of the environment, and could destroy the harmony of it.